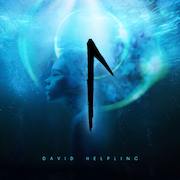 David Helpling tells stories with a cool skill. We should take to listening to his release Rune (67’55”) just before bed, because it feels built of pre-dream sweetness and of that familiar longing for adventure. Its eight tracks weave their way into your mind – each providing a pleasurable atmosphere within which to dwell. Both deeply felt and elegantly played Rune is disarming in its subtle tonal shifts. Taking a calm stance, from his electric guitar Helpling elicits works of languorous introspection. Exploring the possibilities of playing his instrument through the endless delay of digital processors he designs a rich and varied palette of textures and tones – which makes for a constantly renewed musical interest. Along with the looping riffs, sustaining leads and studies in slide guitar Helpling also deploys grace-filled vibrating metal chords and shimmering steel string structures flung toward the sky. Riding the tides of sonic seas, this work shifts in currents of harmonic motion. Textures thicken, and we become enthralled in the revealing depths of solemn and unfrequented regions. Helpling’s imagination carries these performances, which are often beautiful, even breathtaking. Rune will be well-received by the ears and hold fast to the heart. Beneath his album’s slick surfaces there is an insistent humanity – an understanding of the greater whole of which his music is a part. 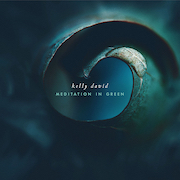 Kelly David is exploring the Earth, and discovering that it is far bigger than he imagined. The release Meditation in Green (58’03”) allows us to project ourselves into his luxurious, long-view. Those open to the seduction of electronic drama and its beautiful symbolism will be substantially rewarded. Utilizing a variety of pristine field recordings, and layering them with gentle percussion and evocative synthesizer surfaces Kelly David produces passages of mystic bliss – where reverberant chords move like slow clouds on the horizon, and glowing tones flex and fade off into a buzz of jungle. From ethno-grooves to Forth World dreamscapes, the arc of this fantasy for synths, samplers and landscapes recedes and expands as the music flows across a leafy, watery and often intense sonic terrain. Some tracks add a ceremonial rhythmic propulsion, but we will recognize that most of Meditation in Green is pushing slowly through a dreamy, verdant realm. This work’s series of seven interludes build tension through minimal means, driving one to consider the larger questions of what it is to be alive. The listening experience is sensuous enough to become lost in, but so vivid that we might encounter ourselves somewhere along our travels. In its textured roar, wilderness sounds, ethereal atmospheres and thunder claps we find an escape from the broken world. The screens of our modern times offer so much to look at, from the trivial to the sublime. Yet, Meditation in Green proves to be a move vivid experience than any random feed could possibly offer. To give his perspective on the world and its ancient governing powers this artist’s vision reaches us through the act of listening, to be interpreted within the theater of our minds. 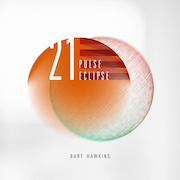 21 Pulse Eclipse (73’30”) unsettles the digital dust. This debut by Bart Hawkins unwinds our minds with eight tracks of gray matter vibrating tones, textures and experiments. His is an unusual realm of different musical laws, and music from this zone will reveal as much about the composer as it does about the listener. 21 Pulse Eclipse resounds in the abyss between dreams. Its lack of reference points may bother some, while in others this feature will be welcomed – for all the questions it will provoke. In its provision of a great many forbidding, fugitive sounds, this work may seem to offer an overfull emptiness. Its stacked layers of oscillations and modulations produce an undulating audio field. The denser areas of sound may be perceived as disjunct, non-directional and dissonant, while just across the landscape a cloud-like mass of harmony slowly drifts closer. With little in the way of a tonal center, a consonance may arise out of the random pulsing of two oscillators – an exercise which offers insight into the relationship between sound and the psyche. With no frame of reference to anything in the natural world, Hawkins’ realizations remind us of a more complicated existence. Hair raises from the skin as electrical charges build up. When uncertainty becomes the effective state, time disconnects, and an unexpected beauty emerges. For all the emphasis on the machinery of Modular Synthesis truly 21 Pulse Eclipse comes from the tradition of music as a product of human thought. Whether considering composition, performance, listening, or appreciation the constraints and capabilities of consciousness play the greatest formative role. Our response is completely internal. Upon its absorption this release shows signs of deepening the mystery of our condition – and so renew one’s sense of wonder. 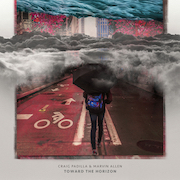 Synthesist Craig Padilla and guitarist Marvin Allen are dreaming a different dream than most Spacemusic philosophers. Throughout the collaboration Toward the Horizon we may hear that which is lighting so brightly inside their heads. As messages fly, ideas flower and synapses snap through the web of electrical circuits across the brain, each mind comes to life in collective play. As so much is riding in every composition, this duo’s sound becomes emotionally all-encompassing. Along its six track route Toward the Horizon grows gradually wider and more personal, until this work has thoroughly expanded into our listening space. Small at first, each piece initially feels narrowly contained, but soon rushes passionately wider. In tightly controlled performance this music thickens, to convey the joy of living, but also shades of solitude and doubt. We hear Allen’s strummed chords climbing slowly above Padilla’s warm electronics, as steely echoing guitar plays against the pulse of gentle sequencer patterns. Dark tumultuous textures act as contrast against this album’s drifting strings, reverberant synths and buzzing synthetic chords. But further in, a rumbling soundmass advances beneath glissando guitar lines and grainy sweeping pads; while further out, slow flow zones oscillate in swarms of glittering points. On the horizon Padilla and Allen can see the future approaching, knowing that somewhere in this distance shines a better day. Toward the Horizon is an album by men of deep mind, two who use music to renew their sense of wonder – and play us into someplace just short of the hereafter, but far beyond tomorrow. 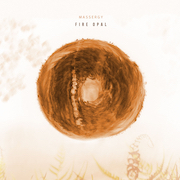 Most Spacemusic embraces a great range of variables, but for that of the soul. Eric Jensen‘s work as Massergy is an exception. Unusually uplifting, the seven works on his Fire Opal (70’13”) reveal themselves as delightful explorations into the sensation of sound. The mode of this album veers between narration and abstraction. Its allure, a graceful controlled calm, feels softened, then supplemented by moments of intriguing sonic drama. We listen to Fire Opal first with our ears, then again with our heart. The luminous austerity found in its unmoored passages culminate in a spacey synthesized symphony devoid of all gravity. Tones spread out in an ethereal atmosphere, then harden into forged, full-tensile strength. Notes climb slowly above warm electronics, as steely echo guitar plays against the icy pulse of gentle sequencer patterns. As contrast to this album’s expansive placid terrain Jensen adds dark tumultuous textures. With the mood bottoming out in dark timbre and questioning chords, the rumbling motion of a lower register penetrates our being – to remind us of a realm much larger than the one in which we live. In our cacophonous times, Massergy’s works are a counter programming. His music supports what is best about humanity, while challenging the worst. It asks only to be listened to on its own terms, in one’s own time. Fire Opal is an album that implores us to take it easy, and focus on our own healing. 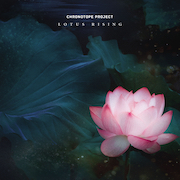 Fully and effectively imagined, Lotus Rising (58’56”) opens up a warm and beautiful space, then moves slowly through it. Recording under the name Chronotope Project multi-instrumentalist Jeffrey Ericson Allen takes time to take in the grandeur of existence – with music that moves from darkness to light along a spaceward tracking arc. His works slowly unfold just as easily in the dreamy brilliance of harmonic climaxes, as they do darkly in the thickening air of a room-shaking rumble. With its celestial choirs, glowing synths and delicate atmospheres, the eight tracks on Lotus Rising contain a fair amount of Spacemusic drama. Once the sequencers kick in the listener is treated to a delightful acceleration in energy – but not enough to disturb the contemplative and expansive nature of this album. Repeating patterns seem to bubble up – providing sleek propulsion across shimmering sonic landscapes – then coalesce and metamorphose, drifting away as the spacey lines meet, combine, and evaporate. Blurry chords extend above imaginative electronic modulations – just beneath the misty aura that surrounds each sound. Each a singular flowing thought, these works ask us to tune into the quieter frequencies. But being meditative does not mean Lotus Rising has to be vague. With its easy cosmic intimations it guides your psyche to stillness through searching probes from the warm heart of Electronic Music. From mysterious and remote to ethereal and heavenly, the eight silvery tracks on Lotus Rising are quieting to the mind. This album’s drifting approach – warm in tone and pleasantly melodious – gives this music a welcoming atmosphere. From textures of desolation, and still chill zones, to vigorous workouts of charged musical charm, Lotus Rising provides a rich, fully formed musical environment we will want to visit over and again. 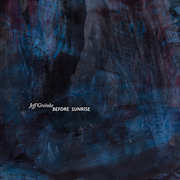 An artist cannot really be represented by a single release, but rather is suggested through an accumulation of work. Throughout his lengthy and varied career Jeff Greinke has gone through an evolution – or maybe, because of its length and so many interesting twists and turns, this aspect of his life may be better described as a convolution. While his earlier albums searched through the rubble of the unconscious, Before Sunrise (57’20”) switches from the cerebral to the specific. With the rigorous organization of the interplay of texture, melody and harmony, and stemming from a developed instinct, he organizes Ambient forms to give his creativity a lucid expression. As usual, Greinke approached the task of producing Before Sunrise with a point of view all his own. Due to the presence of cello, clarinet, piano, vibraphone, flute, French horn, violin and viola this release may be thought to fall in the category of Ambient Chamber Music – and certainly, if you like this sort of thing, then you will not be disappointed. But Greinke has always been a musical outsider – not even faintly trying to get inside – and so these eight tracks do retain that feel and integrity to one degree or another. Some sections of Before Sunrise flow like a spiritual quest for life’s meaning, while others celebrate the outlaw life this remote genre of music may support. As the unwinding ribbon of notes from a violin bend plaintively, droning strings support a melodious narration. Further in a wooded wild place materializes, where we wait, under stars, in the cool of night, well in advance of the first sign of dawn. Thickening under a solemn atmosphere, we may feel a nocturnal presence – like something impending. Possessing the capacity to inspire contradictory responses, it is often very gorgeous – this strange and beautiful wayward place of sound. After all these years, decades of making records, Greinke still asks for nothing more than our quiet attention. There is something radical about that, and about such stubborn faith in one’s work – and in us.