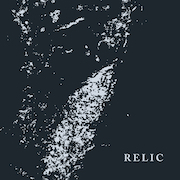 Hotel Neon has always made subdued ambient music with a measured intensity. On Relic (36’27”) they pull from emotional depths and faded memories to shape an album coated in nostalgia and withdrawn creeping textures. On tape the music is an exercise in idea building, on stage it is sheer bliss. The slow burning style of spacey sonics radiates outward, even as the effect works its way toward the glowing inner workings of the listening mind. In five twilit scenes Relic provides a quietly moving impact. The tones the trio produce are processed, delayed, distorted and looped – creating complex harmonies and timbres not usually associated with ordinary electric guitars and keyboard. The vibrations emanating from rubbed, plucked or excited steel strings swirl and morph and assume a new identity. In spare, rare piano notes Hotel Neon extend their poetic ambitions. Under a kindred midnight these fully charged pieces retain a solid formality. Gauzy but gleaming below layers of reverberation a delicate music shows off the ethereal power of sound. As night falls, the guitars call, low in the lowlands and high on the hills. From heights descending notes fall fast, while ascending sounds take more time to reach us. Tones too big for the ear enter through the chest, to touch the heart – then retreat into silence. Following the thread in our head, the emotional intensity of our Relic will open within. 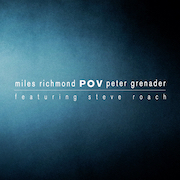 In a sound voyage through dream lands, electric guitarist Miles Richmond and synth-smith Peter Grenader, along with Spacemusic icon Steve Roach have realized POV (61’01”) – an album of fluent and unified music. At times a casual ramble, while at others a vast soul-searching ascent, this deeply lived work leaves the light of our mind on, but with its engine slowed considerably. In six substantially structured tracks Richmond & Grenader with Roach trace graceful compositional arcs. Their creations initially progress in a prevailing sense of propulsion, but further in they go deep, down, dark – descending into a twilight territory. Synthesizers and processed guitar all figure into the arrangement. Lushly orchestrated, POV moves calm, warm whirlpools of tones through thickening electronic drones. As emotionally charged liquid lead lines snake over rolling ambient loops and washes, the listener will gain a feel for texture, gesture and atmosphere. With darkness resolving into light, this album softens. In trembling, shadowy chords, and guitar quotes drawn from “No Pussyfooting”, it shines with promise. POV seems meant for us to tour the cosmos, while sitting quietly in a small room… to wander past everything, into shadows forth, and heartless voids and immensities. By listening to this release, you have taken your first steps onto a larger, better realm. This work offers the feeling of being welcomed, in a way that the rest of the world simply cannot. 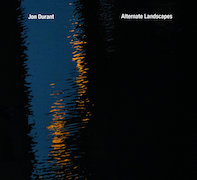 Along with all the usual effects boxes and digital processors guitarists use nowadays, Jon Durant arrives to the recording studio with a great number of solid ideas – good ones, the kind that must track across a sweep of beautiful moments and sonic states in order to become fully realized. His album Alternate Landscapes (58’36”) takes its time in getting its point across. The four pieces are mysteriously affecting, and brilliantly inhabit a musical realm richer and stranger than the standard fare. Alternate Landscapes will take some getting used to, as Durant’s inventiveness will engage unsuspected capacities of our ears and minds. He is not merely sending sounds into space, he seems to be making music whose motion induces space. Vistas may open behind this music – not as settings, but more like the airy or plunging ambiences found in dreams. With gracefully unfurling, caressing phrases, Durant extends his poetic ambitions. Loaded with lush layered guitar orchestrations this album seems of an endless energy. A complexity of sounds merge and separate, leaving the listener with the impression of an aural terrain in motion. As mild yet mysterious discord causes tension and anomalous melodies distend across an illimitable distance, each composition retreats into it own unique territory. Durant travels deeper and further with a resolute sense of discovery. He is also not afraid to veer off into unknown realms – exploring whatever sonics and phonics his improvisations may lead to. As an artistic statement, Alternate Landscapes has nothing to struggle against – other than the dullness of modern minds.

Often, music will reflect the state of the times in which it is being made. Fortunately for us, Erik Wøllo is making music not for our now, but for our future. The album Infinite Moments (57’32”) is a journey into Wøllo’s beliefs and perception of the world, and is powerful in ways that words cannot capture. Playing his electric guitar with an e-bow through a substantial amount of digital processing, he approaches these six sonic flights with a stable sense of serenity. In a masterful, tightly controlled performance his thick, spare, sometimes ominous approach conveys the joy of living, but also a few shades of solitude and isolation. Gone is the familiarity of the six-string tones. Bearing the drama of Wøllo’s slow melodies and embracing harmonies are his rounded, flexing sounds – which arrange themselves comfortably throughout the listening space. Breathing chords, friendly rather than foreboding, emerge, sustain and recede – drawn out in echoing waves of gentle tones. The explored realms pass between pastel cloud sunsets and the velvet cloak of night, to a place of private understandings. Charged with electrical nuance and the questioning nature of proper Ambient Music, Infinite Moments delivers the expected shivers. A completely meditative work, it is as if we are hearing the sound of the cosmos being filtered through 21st century technology. Wøllo observes the granular texture of reality, the severity of its miracles, and the range of its grace. For fans and novices of Spacemusic… Infinite Moments is a must.

Juha-Matti Rautiainen: Above Me Weeps the Sky

Above Me Weeps the Sky

Juha-Matti Rautiainen: Above Me Weeps the Sky
Released: 15 November 2018
www.juhamattirautiainen.com

We find the music of Juha-Matti Rautiainen drifting in a cool deep blackness. Tinged with cosmic melancholy his album Above Me Weeps the Sky (66:31) feels as intimate as a whisper, yet as vital as the sun rising on a new day. Rautiainen has a musician’s gift for finding and organizing the perfect range of sounds and textures meant for conjuring a specific atmosphere – in service to expressing certain emotions. It is this exact sonic poetry that gives this album its slow chill. Rautiainen has obviously left the conventional view of his instrument behind, as Above Me Weeps the Sky finds him using it to explore music of stillness and space. The music slowly alternates between a trembling vulnerability to waves of strength and light – often with a deep subsonic foundation. Coaxing new and surprising timbres, along with more comforting melodies and contrasting harmonies, the field of sound expands beyond the well-established palette of the bass with layered tones, bending notes, metallic pitch shifts and image altering processing. His success may be found in the connection of imagination and creativity to technique and technology – and the taming of a quieter action. Rautiainen has not found the right solutions to the problems plaguing our age, but he has found the right questions. By hearing him play the electric bass guitar in a most resourceful way, doing such imaginative things with it, eliciting sounds from out of the sky on down to the ground, with just four steel strings, it should not be hard for us also to imagine being bigger… larger than the way we find ourselves. We are a meaning seeking kind, and so seek to silence the turbulence within to better carry out our ways. By taking the way of the thinker we may find that we are not living through a bad time, but it is an empty time – which leaves it up to humanity to find the sacred. And so we shall, even as the sky cries above the weary world.

Flood Expeditions: The Gatherings 19 May 2018

People pray in a church. On 19 May 2018 Robert Rich & Markus Reuter played in a church, and did something that was truly new. Their program for The Gatherings Concert Series merged the aesthetics of Classical Music with the profanity of improvisation; as this duo did not just acknowledge the mystery of existence, they celebrated it. Their album Flood Expeditions: The Gatherings 19 May 2018 presents the full concert – where Rich performed at the grand piano and Reuter with his Touch Guitar and digital processing before a rapt Philadelphia audience. Some audiences sing along, or clap, while others may drink, dance, sway or bob. Symphony attendees read the conductor’s notes. At The Gatherings we listen, which provided Rich & Reuter with an opening to delve deeper into a new set of explorations – of a magic they had first encountered in the making of their 2017 studio album Lift a Feather to the Flood. These guys know all the notes, chords, scales, majors and minors. Yet the works found on Flood Expeditions are about the subtle power of sound – not for decorating the live space, but for a glimpse into something spiritual. With its ever-fading atmospheric tones and digital haze their realizations may seem a formless vacuum, yet everything is balanced by optimism. Rich’s piano notes resound through reverberation, surrounded by surreal fluttering environmental textures. Whether playing the keys seated, or reaching into the piano to pluck, scrape and strum its inner workings, he seems to produce emanations from a lifetime of receiving and expressing wonder. Reuter waits deep in the soundscape to find many electric moments. His guitar first breathes lowly, then asserts a color of succinct distortion in heated lead lines, expanding soon into ethereal consonance. Using a uniquely routed echo, he even manages to wedge in a conversation with himself. Rather than root the audience to where they sit, together Rich & Reuter transport us to an immaterial realm – where an internal guidance awakens. This music represents something outside of ourselves, upon which we project our thoughts and contemplations. There are no instructions for listening to Flood Expeditions, there is only the sensation of hearing. As we endeavored to hear their message in the darkened sanctuary this performance reminded us of the nature of possibility – of what we can become. But Robert Rich & Markus Reuter cannot play us into the answers, we must live into them ourselves.

In his music project Stratosphere, guitarist Ronald Mariën, creates loop and effect heavy music that drones and burbles, tinkles and undulates, as if acknowledging the fragility of the state it offers. With his album Collaborations I (72’28”) he pairs off with nine other musicians to produce as many tracks in a distinctive range of new music. Mariën provides each collaborator with an atmosphere over which they may lay their signature sounds – each adding something to the effort that Mariën cannot conjure on his own. As ghostly assemblages of drifting guitar textures meet muted synthetic harmonies, we might zone out through whole songs at a time – only to become startled by some pristine sonic detail buried in the mix. In the restless surge of advancing tones the listener may find strength in the stillness – just as easily as the next track unleashes a lava-hot guitar drone “deal-with-it” drum jam. While some efforts do take the ear strangely, Collaborations I also provides enough reassuring ambient thought zones to color the listening space with familiar tones and warm temperatures. In the movement of these masses of sound, and the resulting radiant, translucent conditions, we find a certain comfort in all the openness, space, possibility and even the danger – as each track struggles for its own unity and cohesion.

starsendradio
Create a free website or blog at WordPress.com.