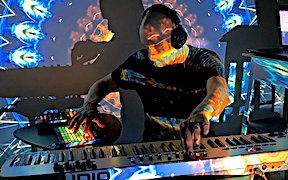 The seven tracks that comprise Solar Cycle (43:59) all seem in their own separate state of motion. With everything moving, everything centered Louigi Verona (aka Kirill Alferov) builds layer upon layer of serial steadily winding weight – realizing a new fidelity as his music flies. Synchronized sequencers pump out intricate rhythms and echoing tones. The lines run out, in, up and down intervals and scales – shifting vaguely – to hurry the current within. Echoing and recoiling through the soundspace broken chords interweave in machine meter, as spiraling electric patterns blend perfectly beneath vivid atmospheres. In a helix of syncopation energy arcs through this work, irradiating rather than occupying the scene. These pulsing, crowded moments hold the listener, so that Solar Cycle may find its order within your mind. While each individual pulsing band interacts with its neighboring row, an interweaved structure comes forth – and makes for a mesmerizing, ever-evolving texture. As the converging swells join forces to produce a peak, a dramatic momentum emerges. The rushing, breathless arrangements transcend the motor metrical, landing with poetic precision. Circling and cycling at the speed of thought, Solar Cycle dances and whirls along currents of creativity. Its bright velocity sparks the imagination – in a remarkable flow of bracing, swiftly moving sensation.