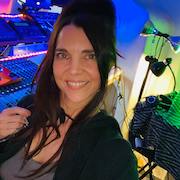 Exploring relationships between the electronic and the acoustic, Serena Gabriel works again with producer and collaborator Steve Roach on Seeing Inside (72:12), their creation of atmosphere and constant sonic motion. In rolling synthetic waves and tender ethereal textures they conjure a beautiful inward space. Softer sounds prevail, as emanations of world instruments, vocals and keyboards are pushed into ever more thoughtful realms. With its slow procession of rising and receding tones, mingling with a most ethereal voice, Seeing Inside seems more a ceremony of sacred sounds than a conventionally composed body of music. From the deliberate pacing, and a sense of consonance over the churning electronic wash, to the issue of warm rounded timbres, these distinct characteristics resolve into an experience so captivating. Classic synthesizer sounds are layered among swelling drones and shimmering accents. In a swirling mist of ever-changing tonality, we progress from areas of darkness to light. These reflective zones are meant to provide a state within which secret webs of knowledge may be revealed. Yet, in moving from one mood to the next, Seeing Inside never loses its sense of direction. In her vocalize style of wordless, emotionally charged expressions Gabriel directs listeners through idyllic nocturnes and compassionate laments. Her voice soars fluently above haunting synth arrangements and rumbling bass notes. Moving effortlessly across registers, she glides from exaltation to soft benediction, and on to that of something seemingly beyond human extent. Swirling amidst sources such as harmonium, lyre, wooden flutes, frame drum, and the earth tones of the didgeridoo, Seeing Inside unifies in a distinct condition best attended to with eyes closed. In such a state the transportive qualities of this work may be fully felt – and its truth heard.