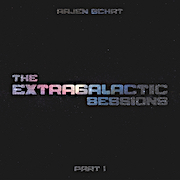 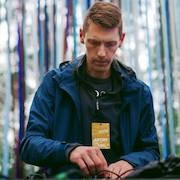 Most people are busy thinking about where they are going. The Spacemusic of Arjen Schat will have you reflecting on where you are. The first in a series, The Extragalactic Sessions Part 1 (67:05) maps the trackless void of space as thoroughly as it does the psychological terrain of the listener. It sounds like a thing the mind already knows, but the journey along its cycling sequencer structures and echoing tone patterns is nonetheless endlessly rousing and inspiring. Full of stirring sparks and charged currents this album imparts a wondrous sense of things much bigger than and far outside of one’s own self. An accord of cultivated synthesizer tones provide celestial accompaniment above the mysterious motoring meter of echoing notes. Giving rise to a palpable sense of propulsion the aesthetic of the Berlin-School is certainly felt in this monument to the imagination. Slow lead lines enter, resounding in a luxurious synthetic zone. The charged performances light out in expressive fanciful flights. Cycling away in space, then reverberating into a cool calm, this ride explores ideas of proportion and scale. Entirely enjoyable and fully felt, and possibly connected to technology in a spiritual way, The Extragalactic Sessions Part 1 takes us to a place that never ends. Its grand ideas, quiet drama and dark imaginings suggest a universe as large as the one within this artist. The voices he hears are those of his synthesizers. They talk in his head, combine, then divide, and in this way Schat’s sonic story comes together. An intelligence extending beyond the cold logic of machines, it is through our listening to these four substantial tracks that the pull of the cosmos commences. The emergence of an electronic musician such as Arjen Schat, one who asks the genre to go further, is an enormous gift to the discipline. His work is a communion with something that will be with us forever. It is about finding peace, beauty and meaning, the positive effect of which should be considered part of everyday human experience – and not merely the random rare chance encounter.