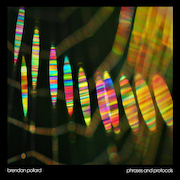 Although of the Kosmische Musik category releases by Brendan Pollard are very much of the air-breathing land world. More than a reckoning with ghosts, his Phrases and Protocols (63:25) captures well the raw edge and interstellar mood of the Rubycon era. These three tracks do sound like lost discoveries from 1975 – dug up on Mars – and prove that, like the Universe itself, this territory is still well worth exploring. Its electrical atmosphere is just as strange and absorbing as the original, as is its rare emotional pull. In breathtaking passages of sequencer dexterity and Mellotron command Phrases and Protocols suggests that renewal is always possible. Tempestuous and dramatic, this album expresses itself methodically through weight, momentum and repetition. Where low doom-laden drones pervade, high untamed gestures oppose and reach for new heights. Gleaming tones, floating like secrets in the air, gets moving the gears of our imagination – while the motor machine precision of echoing notes sweeps in a wired energy. The scene created is so chill that in working out with his massive modular synth Pollard seems to barely break a sweat. Phrases and Protocols makes a strong case for this movement of innovation’s ongoing relevance. As our modern minds search for peace, it is good to find that all this Spacemusic is asking of us is to align with our inner mysteries. Success in this genre means reaching a different realm, and Pollard’s music certainly has an immediate effect on how you feel within your reality. In this masterwork of grand-scale intimacy we find all the charged bliss points of the Berlin-School, and a tender respect – as we continue to look for what lies just beyond the limits.