Alien Planetscapes: An Act of Reason 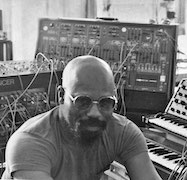 In these strange landlocked times, it feels good to again experience the wide-ranging efforts of Alien Planetscapes. Headed by multi-instrumentalist Doug Walker, this project expanded and contracted personnel to accommodate whatever sonic vision its founder was seeking. His perfect imaginative indulgences circulated widely through the lost world of the cassette underground – to be rediscovered in the light of the present today. One such release (from 1988) is An Act of Reason (55:44), and now finds its re-issue through Penga/Alternate Media Tapes. Although Walker passed away in 2006 his Alien Planetscapes is part of a story that has been unspooling since synthesizers first began to proliferate among creative types in the 1980s – in which Walker, the then Spacemusic knave, ultimately is recognized as a Free Music knight. Joined on An Act of Reason by Carl Howard, the duo act on creative impulses, sometimes harmonious, sometimes dissonant, that come together in a music of its time – even as it evokes an era yet to come. In the thrill of an unfamiliar ritual this pair’s animated interplay commands attention throughout the nearly one hour running time. Glancing and indirect, then suddenly illuminating, their soundscape reflects a psychological apprehension – as the listener, groping through a dark maze, may at any time round a corner into revelation.
The athletic experimentation results in the creation of an ever-evolving sound print. Unexpectedly moving, this recording shifts easily from serenity to improvisational fervor. Muscular and dusky, then tenebrous and searching, the resulting spontaneous composition masterfully converts notes and tones, textures and timbres, into rare cerebral states. As expressions growl and shriek, listeners and players alike feel a cleansing of negative emotions. In a gradual outward motion the arrangement of organ, synthesizers, sequencers, flute, glissando guitar and effects moves from a quiet ferocity of sudden new reckonings to more minimalist murmurings of mystery and awe. Listening to An Act of Reason we can hear Doug Walker being more than an electronic musician. An innovator, he approached music as an exploration, an improvisation, a means by which to put his inner dimensions out into the world. His jams were exciting, as he brought listeners into his remarkable realm… a place where anything could happen. But not everyone will take the time to appreciate this work. It requires some effort to become aware of how well Alien Planetscapes created atmosphere and mood. With its intertwined forms and shades of timbre, and improbable approximations of light and dark, Walker & Howard produce an effect that becomes gradually more unsettling the longer we listen. Nevertheless, An Act of Reason more than repays the effort, as its honesty, intensity and urgency remain undiminished by the passing years. This tape truly put the “mental” in experimental. As long as this vital recording exists, so will its message of free-spirited creation.