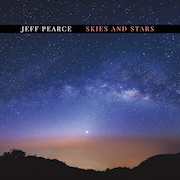 Jeff Pearce has a way of making unique experiences transferable. Skies and Stars (59’57”) is his dramatic reflection on the night sky, and possibly even the forces that have placed him there beneath it. Celebrating the first lights of evening onward his music widens the aperture on the heavens as it tightens its hold over our attention. With its three tracks of lush layered guitar orchestrations this album seems of an endless energy. Under a cavernous reverberation metal wires vibrate and bend, then breath and bloom into atmospheres, textures, and passages of interiority. Each silvery string on Pearce’s guitar has a story to tell… a different episode of time in which the listener and the music become the same through the seemingly endless decay and regeneration of all things in the Cosmos. This music gives few answers, preferring to dwell on the enigmatic. With its daunting intervals and shiny core, Skies and Stars is shrouded in a misty mystical digital signal processing. Through the clever use of loop pedals, long echoes and the splitting and shifting of sonics a dreamy cloud of harmony is realized – yet with always a few tones still lurking in a vast darkness. Trembling with emotion, the music conveys a timeless yearning. This musician seeks permanence, not transience – but the magic of each of his work’s many musical moments vanishes as soon as we pay them any notice. Fans of this style of Spacemusic will know that from there to here is never a straight line. In an era of fidgeting, Skies and Stars offers an arc of unbroken concentration. As the world seems about to slip and tip off its axis, Jeff Pearce is making music for whatever is beyond the horizon of this failing realm. Listening past its ample exploratory marvels, this album offers a kindness, a gentle warm familiarity, rendered into a beautiful keepsake.